Enjoy this round-up from our New Zealand adventures these past few days!

The afternoon of our Day 2 in New Zealand, we continued the beach theme (see previous blog post!) but this time we had to hike 90 minutes round trip to get there! The world-famous Cathedral Cove is a fairly active hike up and down through a semi-rainforest, a pine forest and finally 150 stairs down to the absolutely stunning beach vista used in the farewell scene of the Pevensie children in the Chronicles of Narnia: Prince Caspian. Gorgeous! 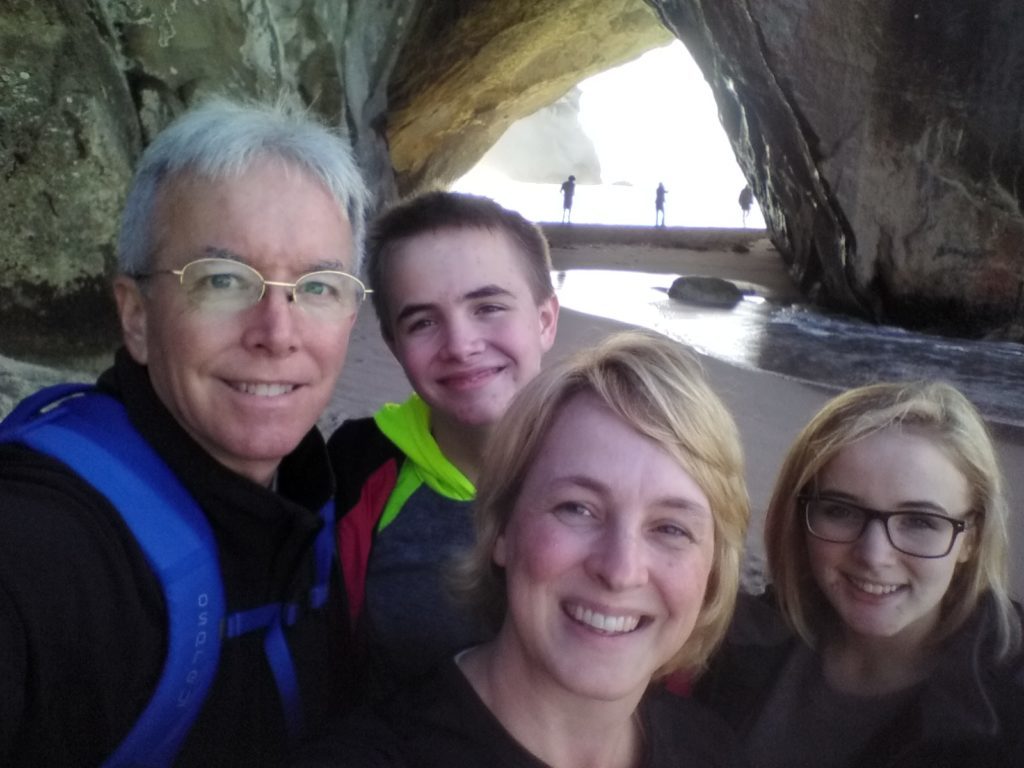 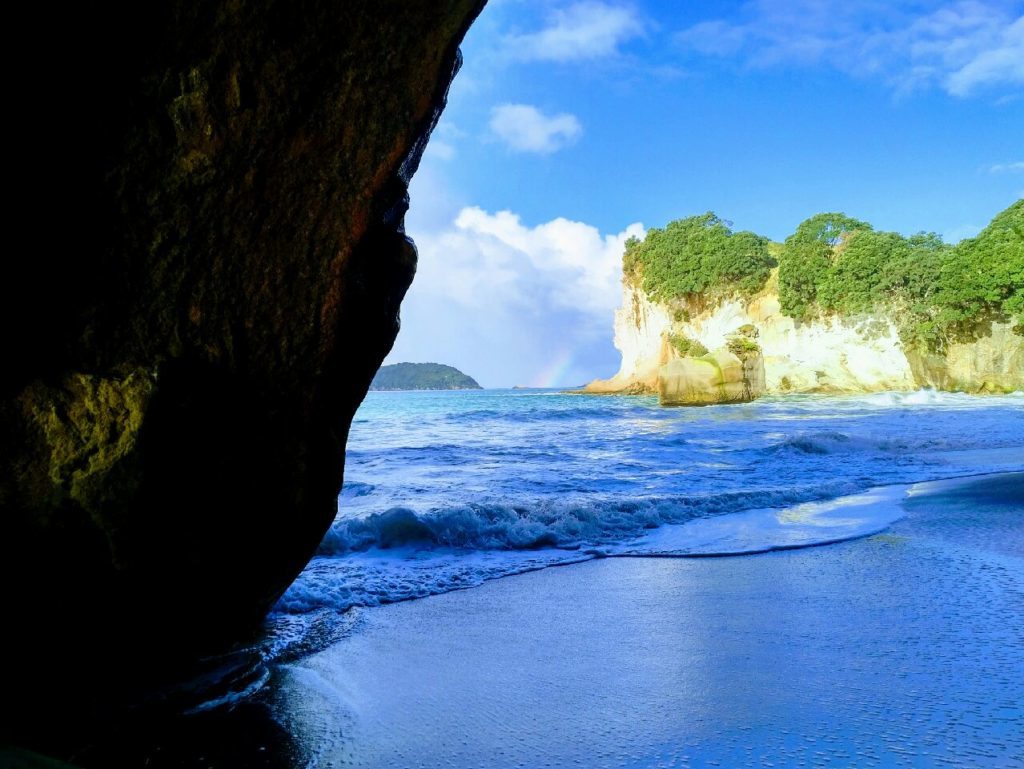 After that, we drove around the Coromandel Peninsula, looking for New Zealand ice cream in the town of Whitianga. Although we got there after 5pm, and the only ice cream shop was closed, we did find a convenience store still open which sold ice cream. (We are quite surprised at how early the stores close, here!  But as our daughter pointed out, it allows the shop workers to be home with their families for dinner, which is probably a much healthier expectation than the USA version of staying open until 8 or 9 pm!). After ice cream (doing things backward!), we got meat pies for dinner. This is our new favorite food! Picture a single-size chicken pot pie but with every conceivable meat filling, and available fresh and hot at every convenience store, bakery and gas station!

Stayed overnight at an adorable stand-alone motel unit bungalow with 2 bedrooms, at a ‘Holiday Park’ (a campground that also has bungalows). What an amazing day.

Day 3 – Driving Down the Entire Length of the North Island to Wellington!

This was a long, meandering driving day through the gorgeous countryside of New Zealand. We drove from the northern tip of Coromandel Peninsula, quite far north in the country, all the way to the southern tip of the North Island.  New Zealand is two large land masses – the North and South Islands. We couldn’t do both in the roughly 6 days we have, so we concentrated on the North Island.  The drive was beautiful, although quite long because except around the two major cities, New Zealand doesn’t have a big highway system! So we were driving along the equivalent of Route 66 in the US, meandering through small towns en route. Which is what made a long driving day (almost 12 hours) quite fun!

We ate meat pies (of course) in a little bakery on the way, and later passed the beautiful Lake Taupo, crowned by a beautiful horizon-to-horizon rainbow.

Jeff and I finally feel like we got the hang of driving on the left hand side of the road without having to think about it every moment.  We must confess, though, that we were very glad to pull into Wellington at 9:15 pm, before the front desk of our lodge closed at 9:30!  We were ready to stretch out and rest! 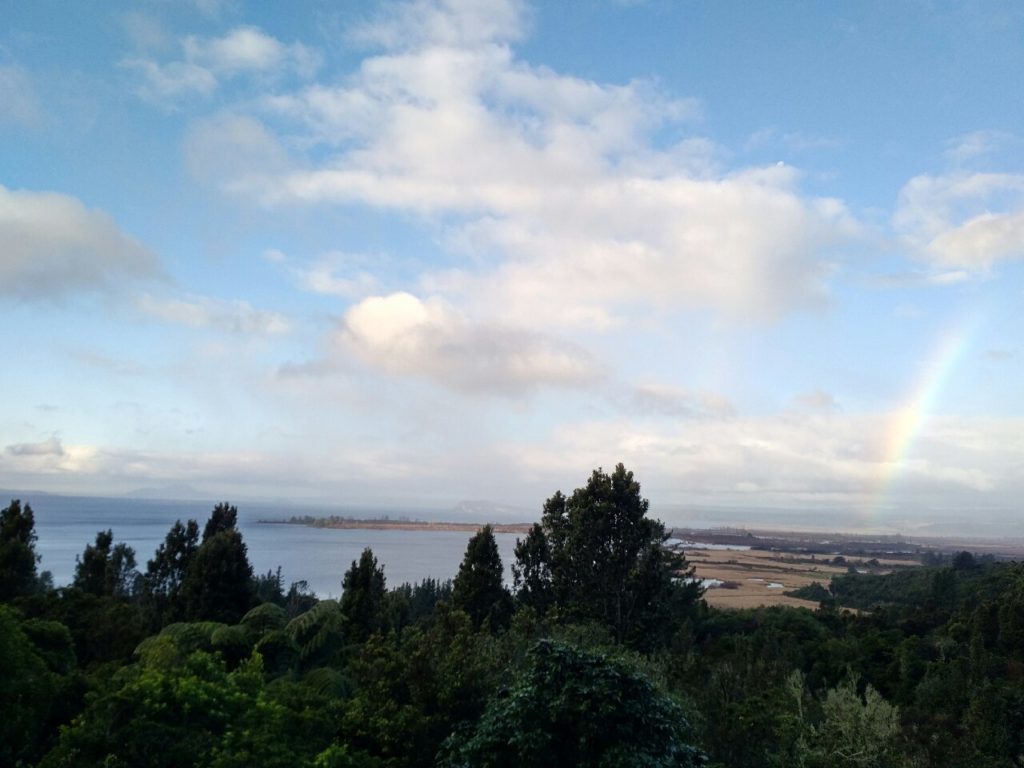 Today is one of those bucket-list days for me, so forgive the long post on this! As a movie fan (I am one of those people who always watches the behind-the-scenes features on the making of the movie, on our movie DVDs!) I have for YEARS wanted to tour Weta Studios/Workshop. These folks are the geniuses behind the special effects in many of our favorite blockbusters…not just the Lord of the Rings and The Hobbit, but Avatar, lots of Marvel movies (The Avengers, Iron Man), Narnia movies, etc.

So I woke up this morning as excited as a kid at Christmas, to be totally honest about just how big of a movie nerd I am! 🙂

We started the day with all four of us enjoying some amazing coffee in one of the gazillions of coffee shops in Wellington. (Yes, our kids have been drinking coffee for years – I am quite sure there’s something wrong with us as parents for allowing /encouraging this!). The Wellington area is home to a celebrated coffee industry, sort of like Napa for the wine industry, and we had heard a lot about how amazing the coffee is.  I’m not enough of a coffee-phile that I expected to be able to tell the difference. (At home, all I know is that I dislike Starbucks bitter coffee and love Dunkin Donuts smooth coffee).  But….wow.  YES, I could taste the difference. Amazing!  I see why this place is a tourist destination for those who know a lot about coffee.

After our coffee stop, we got to the main event of the day: touring the Weta Cave! The studio is a working studio, so they don’t let tourists roam around much of it.  There’s a special back-door area into the studio that they have arranged for guided tours.  We couldn’t take pictures, sadly, since everything we saw is not owned by Weta but by the Hollywood studios that paid for that suit of armor or that fake machine gun for their movies.

We had an amazing guide named Matt, who is one of the special effects guys who does all the finishing touches of painting the swords, guns, armor, etc etc to make everything look real. We saw so much amazing stuff: the head/shoulders/full body casts they used to make masks and effects for Frodo and Bilbo in LOTR/Hobbit, and for lots of other actors, like for Matt Damon in movies like Elysium and Scarlett Johansen’s recent ‘Ghost in the Shell’ movie. (I think that was the name…havent seen that one.)

We saw props and weapons galore, and amazing stuff like suits of armor for elves and men from LOTR. We saw how they created a lot of their digital effects, and the physical effects like the miniatures of buildings, complex spacecraft, or city scapes (or ‘bigatures’ as they call them, since they are in miniature scale but can fill a room!). We even got to hold a heavy elven bow, and hold the (heavy) chain mail worn by actors like Viggo Mortensen (Aragon) in LOTR. Most actors wore lighter fake chain mail and used lighter metal swords…but apparently Viggo wore and used all the real thing and became what the sword-fighting choreographer said was the best swordsman he ever knew. Viggo is a legend around here (a very generous and genuine man, apparently). Really, although there are exceptions, it seems as if the Weta people love most of the actors they have worked with.

All of us came away impressed…and I think our kids are seriously interested in pursuing movie-production-design careers now! We already were thinking that might be an interesting direction for them, since Atlanta has an active, burgeoning movie industry. But our daughter is a rising senior in high school and will be likely pursuing an engineering degree for college…and she’s now VERY interested in trying to use that skill set in the movies for a career somehow.  She’ll need some sort of contacts to break in to do a co-op or summer internship in the industry during college but we trust God will provide that if that is His plan. 🙂

Anyway, after an amazing 4 hours at Weta, we had lunch at a coffee shop on Cuba Street (sort of a Soho-like pedestrian area), walked around the city, and finished the day with a stroll around Oriental Bay. We sat by the sea wall and watched the lights come out as darkness fell on the mountains that ring the city.  Magical. 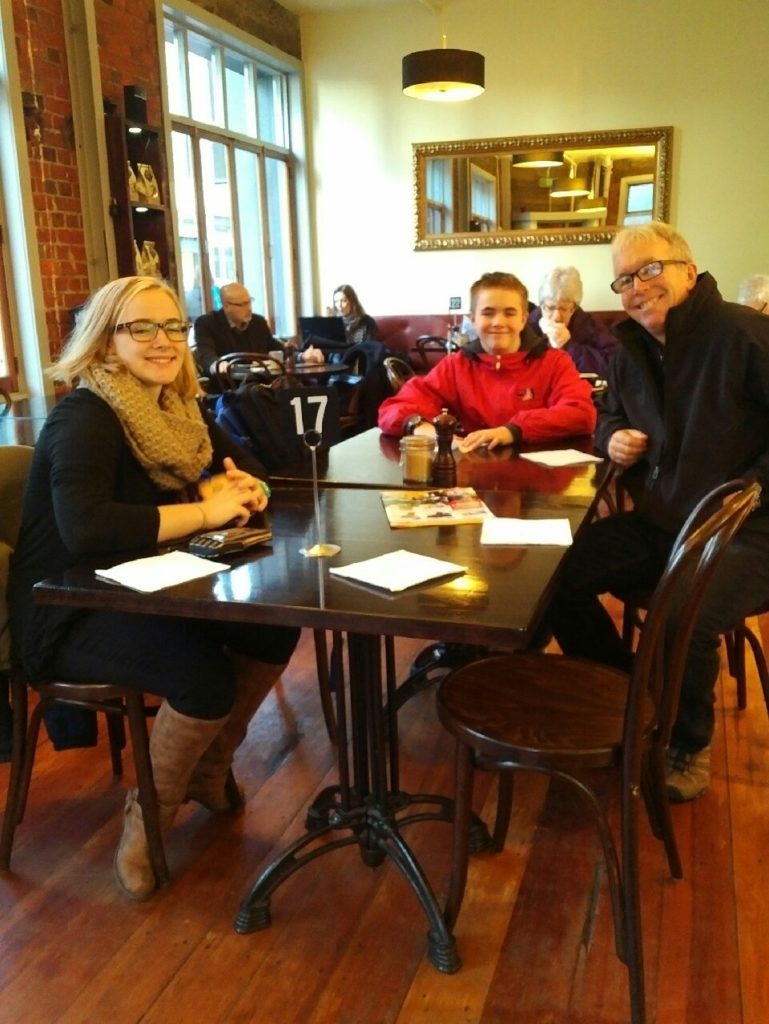 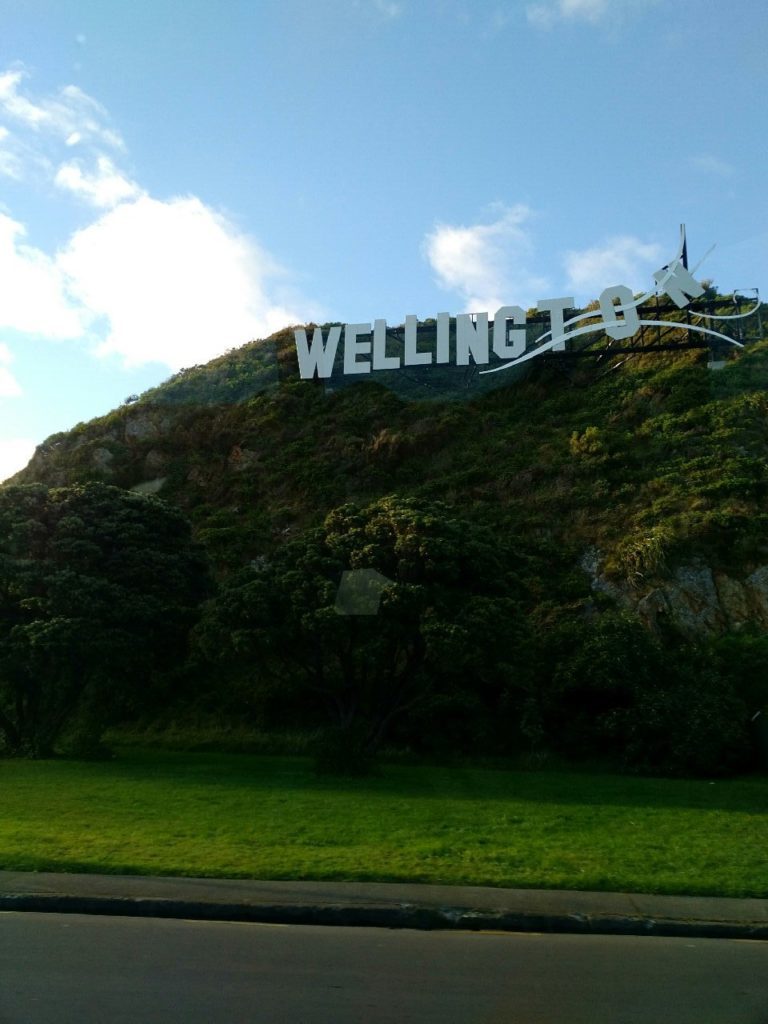 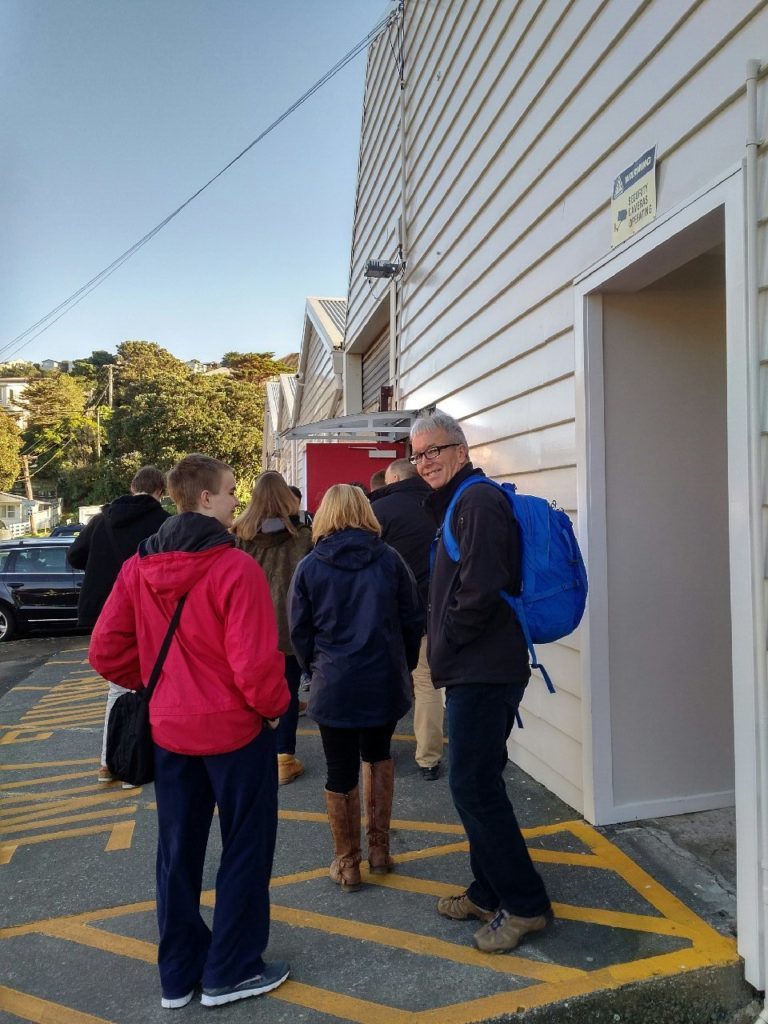 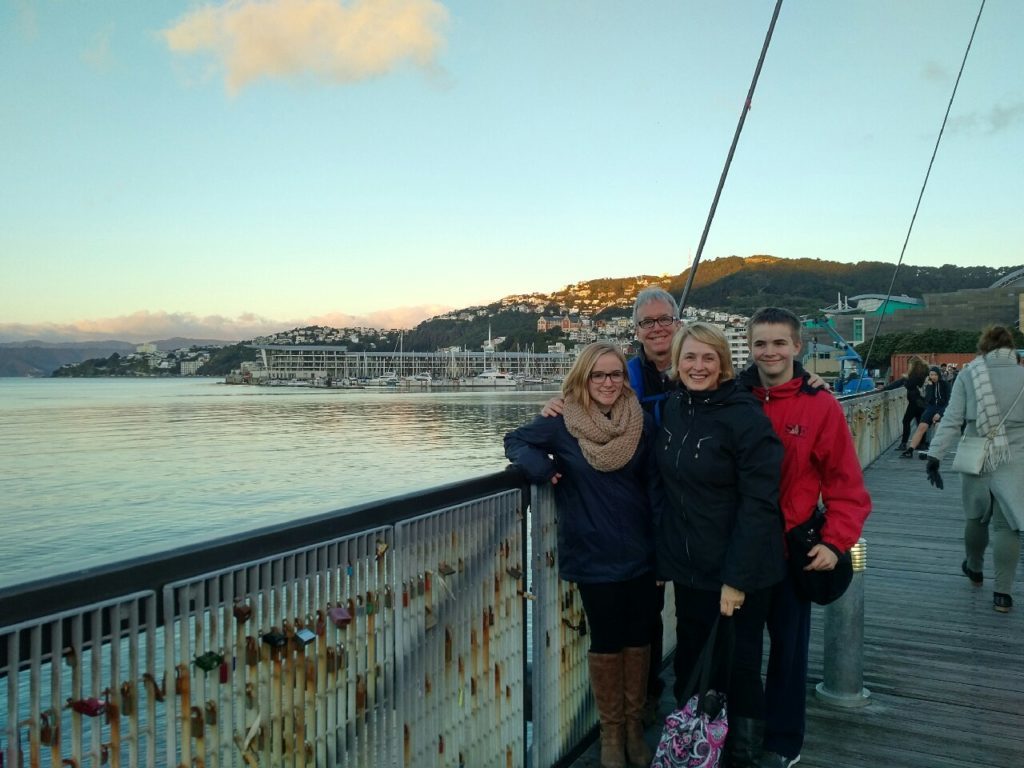 Day 5 – Driving Back to Auckland

Today we drove 7.5 hours back to Auckland, passing through the Tongariro National Park, home to a mountain and area otherwise known as Mount Doom and Mordor in Lord of the Rings. :-).  There is a famous all-day hike/climb here called Tongariro Crossing that we are determined to come back and do at some point in the future! I wish we had more time here, but we are so grateful for the time we DO have, and all of us hope we will be back.

We took Gloria and Alan, our amazing Auckland hosts, out to dinner. They chose a Cambodian restaurant called Sophieara that was a favorite of theirs and I could see why. We ate way too much!

Tomorrow, we will hang out with Gloria and Alan in the morning, and then leave for Sydney. We gain back a few hours in the air, and land early afternoon. So it is partly a travel day, but we will be exploring Sydney by tomorrow night! What a crazy thought. And what a GIFT to be able to do this with our family. It is one of those ‘we can’t afford it but we are going to do it anyway before the college years arrive’ decisions. And we are all so grateful for it!