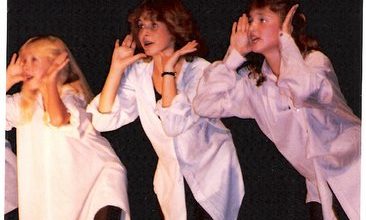 What thoughts run through your mind when things just don’t seem to be working out? What about those times when it seems as if God has suddenly taken a coffee break and you feel like you’re on your own?

When things don’t go the way we want, for us or our kids, it is so easy to try to “fix” things, make them go the way we believe they should. But by taking control of the situation we are often, without even realizing it, acting as if God isn’t working or taking care of our lives. I see now how one of my big disappointments – before I even knew God for myself – was God’s divine direction to close a door that meant everything to me, because He had a very different plan for my life.

As I left high school, I was convinced I was headed for a career in music or musical theater. Always a lead and dance captain in our school plays, I was also a member of our elite singing group – all of which were led by an especially gifted director. We were encouraged to never settle for less than our best, including having the humility to ask him to replay a difficult stanza and go over it multiple times if that was what we needed to get it right. Our performers and groups were always among the top in the state. I loved every minute of it.

As I moved on to college, I had my sights set on my school’s official – and prestigious – choir. But to get there I, like all the other newbies, had to pay my dues in the large freshman chorale. Made up of a slew of hopeful singers, it was, unfortunately, the lowest priority of the school’s music director whose heart and attention was with the elite group. He quickly got annoyed with anyone – like me – who regularly raised a hand to ask for clarity or help. In fact, most of the others in my section were so intimidated by his demeanor that they passed me notes with questions to ask!

I was thankful when the end of the year came. I felt like I nailed the audition for one of the few spots that would open up in the elite choir the next year, and was considered a front runner by my peers. The problem, I realized later, was … the director simply didn’t like me. I remember looking at the final list of four names where it hung on the director’s door, and my heart sinking as I saw my name posted not as a new member, but as first alternate. Fighting back tears, I took little comfort in the looks of surprise, the pats on the back and the “it shoulda been you’s” from my peers.

I knew my only shot would be if one of those who made it dropped out – and when I returned after the summer I learned that, lo and behold, someone did! I rushed to the director’s office, only to find that he had actually skipped over me and had instead brought the second alternate on board. I was dumbfounded. And shattered.

At the time, letting go of my dream was immensely painful. But in retrospect, I am so glad I didn’t kick and scream and try to force a different decision. Because now I see so clearly that the picking of the second alternate over me was a turning point for my life. Clearly, someone else – who I didn’t even recognize yet – had other plans for me. Had I made that choir, I would have been well on my way, and enthusiastically so, to having some sort of career path as a performer. (Or at least, a frustrated waiter who was a performer some of the time!) Instead, I had to switch my major from music and drama to economics and government.

This complete change in focus eventually led me to Capitol Hill and then Harvard and then on to Wall Street, gathering analytical and research skills along the way. And more importantly, along the road I also met God and realized: He was in this. For he has taken my gifting and passion for stage and screen communication and put it to use in ways only He could have ever imagined. Every day, when I stand on a stage or go on television and radio to share my research findings about truths that heal and help marriages and relationships, I see anew just how intimately He has guided my life for His purposes – which are far more amazing than mine ever could have been.

This little “turning point” story reminds me and my children – and will hopefully do the same for you – how often His purposes can only come from letting go of our need to be in control. Even in the face of great disappointment, trusting and following where He leads will ultimately be far, far better for us than the fleeting victories we were so focused on at the time.

What we think may be the end of a dream may be the beginning of a whole new God-sized dream that only He understands at the moment. So the next time you feel as though God is on a coffee break, keep in mind He may just be creating a whole new flavor for your life.  Frappuccino anyone?