Home > Articles > Mourning in our Ministry: The Amazing Life of Naomi Duncan 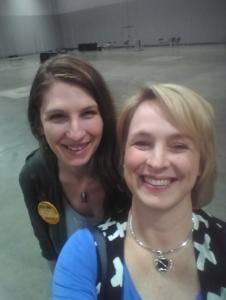 Sixteen years ago, in December of 2004, I met a remarkable woman who drove from Nashville to Atlanta to visit with me.  Three months before, I had published my first relationship book, For Women Only, which was quickly becoming one of those unexpected best-sellers that turns your life upside down.  Only I had no idea how to guide it to being “upside-down” in a good way. I had no idea how to steward this incredible opportunity I had been given.

Naomi became my speaking agent, a guide through the craziness, a friend and a sister. She and her pastor-husband, Brad, moved back to Oregon to plant a church outside of Portland. But still, she was always there as the “engine” for the ministry and a voice of Christ-like wisdom when the path wasn’t clear.

And now, once again, my life has been turned upside down… and I have no idea how to walk this path without her.

Naomi went in for routine, non-invasive surgery on a routine Tuesday, expecting to be home that evening. Our team prayed for her, and all expected to get good news quickly. But complications occurred. Naomi was just eager to get home to her husband and kids, and kept reassuring us: It was fine, things were fine, I can’t believe they are keeping me another night, how are things with the planning for the new video series? Her husband and I, talking and texting on the side, were less sanguine. Things just weren’t clear. Five days later, on a Saturday afternoon, the hospital sent her home.

Monday morning at 4 am Pacific time, her husband called. He could hardly speak. Naomi had collapsed Sunday night, been rushed to the ER, coded 5 times, and they couldn’t save her. We found out later it was a pulmonary embolism.

We had lost a sister.

As I write this, it has been over a week since that call, and I still can’t wrap my mind around it. None of our team can. There have been floods of tears, followed by laughter at some hilarious memory, followed by more tears. We are so grateful to know that God is in control and she is with Him. And yet it has just been so darned painful – especially as we think of the heartbroken family that she loved so fiercely.

We have been giving ourselves space to grieve, but have also been trying to notify as many people as we think need to know.

It’s a lot of people.

Naomi’s humorous personality, capable skill-set, wisdom, and love for Jesus touched tens of thousands. For the last week we have been hearing shock and grief from the most unlikely people … except that they aren’t unlikely. The woman at a marriage conference who Naomi convinced to get counseling instead of a divorce lawyer. The organizer from an international ministry event who Naomi spent dozens of hours helping, even though they couldn’t afford to pay. The volunteer who worked side-by-side with Naomi at a book table for a weekend and ended up feeling that she, too, gained a sister in that short time.

But here’s the thing: A lot of people felt like that with Naomi. She was dry-witted, skilled, caring, direct, kind, strong, generous and loyal – and shone with the light of Jesus every day.

As we see this outpouring of love, I wish she was still here, so I could tell her how proud I am of her.

I hope God allows her to see this outpouring of love.

I hope we all take time to hold our loved ones a little tighter, even as we pray for hers.

I hope we seek the comfort of the One who makes every sad thing untrue.

And I hope we do what Naomi would want us to do in this moment: believe that Jesus comes close to the broken-hearted; trust that He is sovereign even when we do not understand; and believe what He said when He too was heartbroken by the death of a friend: “I am the resurrection and the life. Whoever believes in me, though he die, yet shall he live.”

If you would like to read more about Naomi, tangibly support the family (to help with their extensive medical bills, etc.), or watch the livestream Celebration of Life service on Saturday June 13, see the GoFundMe page set up for the family.