Home > Articles > How Do Husbands Rate Their Marriage? The Survey Says….

Husbands, how would you rate your marriage? The Iron Sharpens Iron ministry for men recently conducted a single-question survey of 1,500 married men who attended their events. And that was their question: How would you rate the state of your marriage in 2018? The answer options were: “struggling,” “fine,” “good,” and “godly.”

Conventional wisdom—based on some inaccurate but commonly quoted statistics that are demystified in my book The Good News About Marriage—would assume that the majority of marriages are on the rocks: struggling, unhappy, perhaps not even likely to make it. But (spoiler alert!) the results of this survey were quite the opposite.

Let’s look at the survey results, some common misconceptions about marital happiness, and our own research—so you can find out how to use the findings to strengthen your marriage. 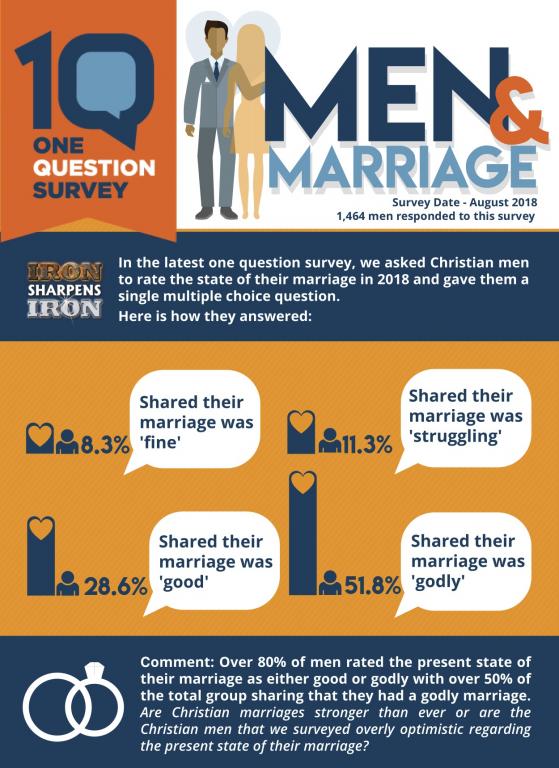 A majority of the men surveyed gave their marriage strong ratings.

In responding to the survey, roughly 80% of Iron Sharpens Iron men rated their marriage either “godly” (presumably the highest level) or “good,” and 20% said their marriage was “fine” or “struggling.” Although one in five couples clearly need additional help and hope, the overall results are not only encouraging: they generally match the findings of our research and that of many other social scientists!

It is a popular misconception that most marriages are just hanging on. The reality is that most people enjoy being married! In our survey for The Surprising Secrets of Highly Happy Marriages, which compared both husband and wife answers, 71% of couples had good-to-great marriages, and 29% had so-so or struggling marriages.

Another popular misconception is that “the rate of divorce (and unhappy marriages) is the same in the church,” but that is the furthest thing from the truth. Most people who attend church regularly have significantly lower rates of marriage problems—and far higher rates of truly happy marriages! (This could account for why the Iron Sharpens Iron—a Christian ministry—satisfaction numbers were higher than in our survey of the general population.)

Men: how would your wife answer the survey question? Ask her!

Although those positive findings are quite encouraging, the Iron Sharpens Iron men—and you—might want to dig deeper by asking a key question: what would the numbers be if your wives had also taken this one-question survey? We found a mismatch in about 10% of couples, where a husband rated a marriage good or great and the wife rated it so-so or struggling. If a husband is willing to use this question as a gentle conversation starter, it can be a great opportunity for him to hear his wife’s heart.

Listen and engage, to encourage your wife and draw you closer.

The key for any godly man is to learn how to listen and engage with any concerns, hopes, or requests raised by his wife, without seeing them as personal criticism. Most women, when they want to talk about the relationship, are not saying “you’ve failed”—although we know it sounds like that to you! Instead, they’re saying, “This is an opportunity for us to get closer, and here’s what would help.” For all marriages—especially those that truly need more encouragement and support—showing a desire to get closer is a great first step for any husband who wants to lead his marriage well.

Looking for encouragement for your life and relationships? Learn about the little things that make a big difference in every relationship, from marriages to parenting. Subscribe to updates from Shaunti here!

Shaunti Feldhahn loves sharing eye-opening information that helps people thrive in life and relationships. She herself started out with a Harvard graduate degree and Wall Street credentials but no clue about life. After an unexpected shift into relationship research for average people like her, she now is a popular speaker and author of best-selling books about men, women and relationships. (Including For Women Only, For Men Only, and the groundbreaking The Good News About Marriage).

Her latest book, Find Rest: A Women’s Devotional for Lasting Peace in Busy Life, focuses on a journey to rest even with life’s constant demands.

This article was first published at Patheos.