So what’s the problem with this picture? (Yes, pun intended.) Of course I’m five degrees of furious that my 13-year-old son can’t turn on television without having that image tempt his visually-wired brain without his consent, as news channels broadcast the latest example of Kardashian excess. And I’m intensely worried about the inevitable, silent comparisons my 15-year-old daughter and her friends will make between the perfectly toned (and let’s be honest, photoshopped) body in the selfie and their own perfectly normal, healthy adolescent figures.

But all that isn’t my main problem: my main problem is that concerned citizens can’t even say this is a problem without people calling us slut-shamers. Without people telling us (paraphrasing an actual comment about my book Through A Man’s Eyes on this topic), “Go to that really hot place for eternity with all those other bigoted, idiotic people like you who need to go have sex with themselves.”

Raise your hand if you think we should be having a conversation about two different types of decency here.

If some women are perfectly fine with taking nude selfies, and speaking out against it becomes a societal no-no, where is the line? When does pushing the envelope become too much? And how will there ever be a “too much” if we don’t fight the censors who say that politely asking for a return of old fashioned modesty is slut-shaming?

To those women who get indignant at me, I ask: instead of trying to silence my message, look at it more closely. You may still disagree, but you’ll realize the intention is respectful, not the opposite.

To those people who agree with me, I ask: speak up. Say your piece. Don’t stoop to the level of the haters, but continue to take your place in the public square. Don’t cede the ground to those who try to silence you. Because just imagine: if you let them push you out of the square the only thing left will be Kim Kardashian’s nude figure standing as a testimony to free speech. 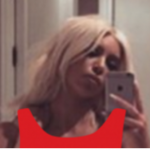 I want to hear from you!  By voting in this poll, you will also hear from me via email when I post to this blog!

Fill out my online form.

Wish Shaunti could speak at an event in your area? You can help! Forward this piece or others to a leader at your organization or church, with a note of recommendation. They can reach Shaunti atNDuncan@shaunti.com.

Shaunti Feldhahn is the best-selling author of eye-opening, research-based books about men, women and relationships, including For Women Only, For Men Only, the groundbreaking The Good News About Marriage, and her newest book, Through A Man’s Eyes. A Harvard-trained social researcher and popular speaker, her ﬁndings are regularly featured in media as diverse as The Today Show, Focus on the Family, and the New York Times. Visit www.shaunti.com for more.

This article first appeared at Patheos.