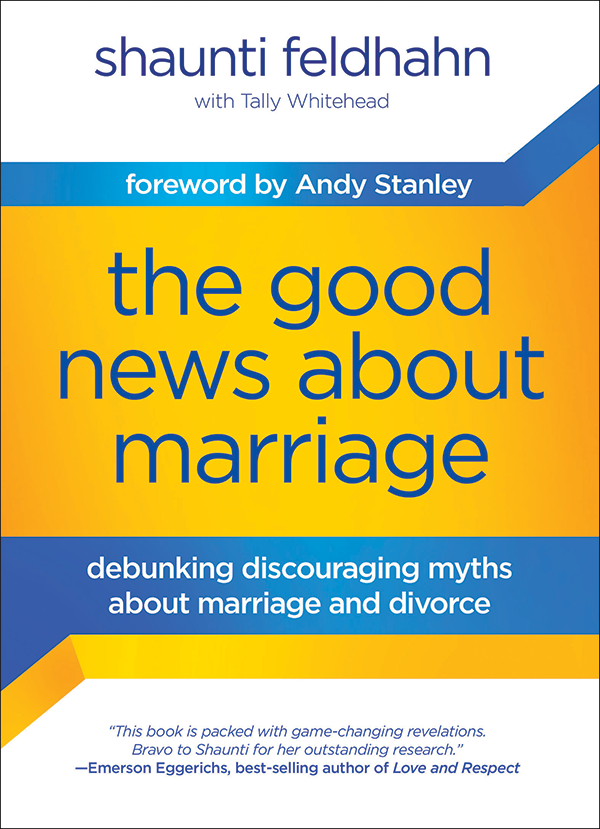 The Good News About Marriage

Divorce isn’t the greatest threat to marriage. Discouragement is.

You’ve probably heard the grim facts: Half of all marriages end in divorce. The divorce rate inside the church is the same as outside. And, most marriages are just holding on. But what if these “facts” are actually myths?

For too long, our confidence in marriage has been undermined by persistent misunderstandings and imperfect data. This landmark book will radically change how we think and talk about marriage—and what we can dare to hope from it.

A Note From Shaunti

Back in 2006, I wanted to correctly cite the divorce rate for my syndicated newspaper opinion column but was confused by a host of conflicting sources and references.  An answer that I thought would take two minutes to confirm took eight years to unravel as my senior researcher, Tally Whitehead, and I spoke with leading researchers, dug into the complexities, and began realizing the vast scope of misinformation, incorrectly-interpreted research, studies that downplayed positive findings, and quite often, commonly-cited statistics based on studies that didn’t even exist

In The Good News About Marriage Tally and I document the big conclusion arising from those eight years of investigative research: Some of the most common and discouraging beliefs about marriage and divorce – beliefs that are stealing hope from millions of marriages — are simply not true! And although there is a great deal of actual good news out there, I don’t think any of it has made it into our conventional wisdom.

While many very real concerns about marriage still exist, for too long we have been unnecessarily discouraged.  It will restore hope to many marriages – and those who work with them! – if we are aware of the very real good news that also exists today.

Shaunti Feldhahn is a Harvard-trained social researcher, popular speaker, and best-selling author.  She started out as an analyst on Wall Street and now uses her analytical skill set to investigate life-changing truths about relationships. You can learn more here.

Tally started as Shaunti’s research assistant over 8 years ago, mainly doing research and interviews for her weekly syndicated newspaper column. She also helped Shaunti from time to time with her books and articles, while she completed her MA in Practical Theology. With Shaunti’s latest book, The Good News About Marriage, Tally has stepped up her role, becoming her Senior Researcher, as well as a contributing author. Tally also serves as Director of Christian Formation at her church in the Columbus, Ohio area, where she resides with her husband and four kids. You can follow Tally at www.tallywhitehead.com – See more at: http://shaunti.com//about-shaunti/